Austin Fire Dept called us to remove a swarm from a bicycle that was parked in front of the University Co-op on Guadalupe yesterday!  The bees were calm and pretty easy to re-locate, YAY!!! There was quite a large crowd around though, lots of questions and lots of “OMG!” as I started scooping handfuls of bees out from under the seat!  haha.  Even had a reporter there who plans to write a quick story on the project! mmmm We’ll see if it gets published.  She was going for the Chronicle! 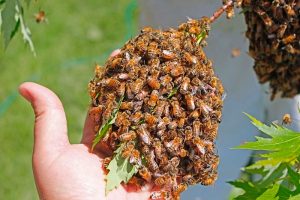